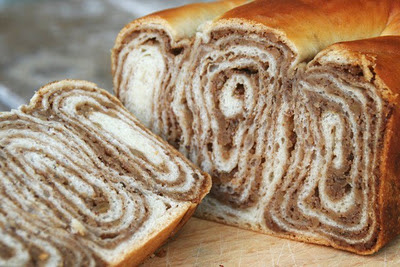 The Daring Baker’s October 2011 challenge was Povitica, hosted by Jenni of The Gingered Whisk.  Povitica is a traditional Eastern European Dessert Bread that is as lovely to look at as it is to eat! 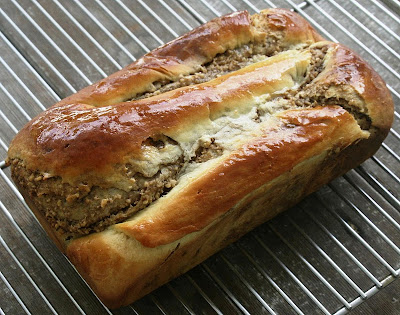 Povitica
taken from The Gingered Whisk
Ingredients (to make 4 loaves)


Topping:
½ cup cold strong coffee
2 Tbsp sugar
melted butter
Directions
To Activate the Yeast:
1. In a small bowl, stir 2 tsp sugar, 1 tsp flour, and the yeast into ½ cup warm water and cover with plastic wrap.
2. Allow to stand for 5 minutes.
To Make the Dough:
3. In a medium saucepan, heat the milk up to just below boiling (about 180°F), stirring constantly so that a film does not form on the top of the milk. You want it hot enough to scald you, but not boiling. Allow to cool slightly, until it is about 110°F.
4. In a large bowl, mix the scalded milk, ¾ cup sugar, and the salt until combined.
5. Add the beaten eggs, yeast mixture, melted butter, and 2 cups of flour.
6. Blend thoroughly and slowly add remaining flour, mixing well until the dough starts to clean the bowl.

7. Turn dough out onto floured surface and knead, gradually adding flour a little at a time, until smooth and does not stick.
8. Divide the dough into 4 equal pieces (they will each weight about 1.25 pounds).
9. Place dough in 4 lightly oiled bowls, cover loosely with a layer of plastic wrap and then a kitchen towel and let rise an hour and a half in a warm place, until doubled in size.
To Make the Filling:
10. In a large bowl mix together the ground walnuts, sugar, cinnamon and cocoa.
11. Heat the milk and butter to boiling.
12. Pour the liquid over the nut/sugar mixture.
13. Add the eggs and vanilla and mix thoroughly.
14. Allow to stand at room temperature until ready to be spread on the dough.
15. If the mixture thickens, add a small amount of warm milk.
To Roll and Assemble the Dough:
16. Spread a clean sheet or cloth over your entire table so that it is covered.
17. Sprinkle with a couple of tablespoons to a handful of flour (use flour sparingly).
18. Place the dough on the sheet and roll the dough out with a rolling pin, starting in the middle and working your way out, until it measures roughly 10-12 inches in diameter.
19. Spoon 1 to 1.5 tsp of melted butter on top.
20. Using the tops of your hands, stretch dough out from the center until the dough is thin and uniformly opaque. You can also use your rolling pin, if you prefer.
21. As you work, continually pick up the dough from the table, not only to help in stretching it out, but also to make sure that it isn’t sticking.
22. When you think the dough is thin enough, try to get it a little thinner. It should be so thin that you can see the color and perhaps the pattern of the sheet underneath.
23. Spoon filling evenly over dough until covered.
24. Lift the edge of the cloth and gently roll the dough like a jelly roll.
25. Once the dough is rolled up into a rope, gently lift it up and place it into a greased loaf pan in the shape of a “U”, with the ends meeting in the middle. You want to coil the dough around itself, as this will give the dough its characteristic look when sliced.
26. Repeat with remaining three loaves, coiling each rope of dough in its own loaf pan.
27. Brush the top of each loaf with a mixture of ½ cup of cold STRONG coffee and 2 Tbsp of sugar. If you prefer, you can also use egg whites in place of this.
28. Cover pans lightly will plastic wrap and allow to rest for approximately 15 minutes.
29. Preheat oven to 350°F.
30. Remove plastic wrap from dough and place into the preheated oven and bake for approximately 15 minutes.
31. Turn down the oven temperature to 300°F and bake for an additional 45 minutes, or until done.
32. After about 30 minutes check to see if the bread is getting brown and if so, you may want to cover the loaves with foil.
33. After you have completed cooking, remove bread from oven and brush with melted butter.
34. Allow to cool on a wire rack (still in the pan) for 20-30 minutes. Remember, the bread weighs about 2.5 pounds and it needs to be able to hold its own weight, which is difficult when still warm and fresh out of the oven. Allowing it to cool in the pan helps the loaf to hold its shape.
35. It is recommended that the best way to cut Povitica loaves into slices is by turning the loaf upside down and slicing with a serrated knife.
Storage:
There are several options for storing (and eating) your four loaves of Povitica: 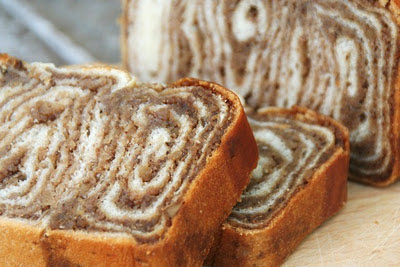