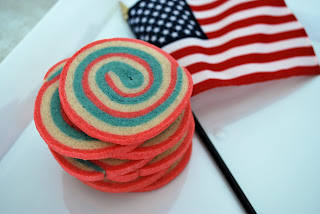 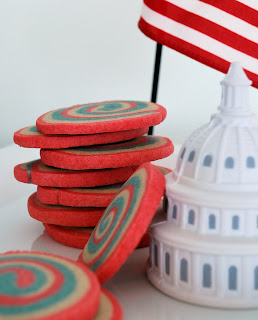 Pinwheel cookies are typically two layers of dough, one chocolate and one vanilla, rolled together to form a swirly looking circle!  I decided to experiment with a traditional recipe and instead of making a chocolate layer I used food coloring to make three layers of red, white, and blue. 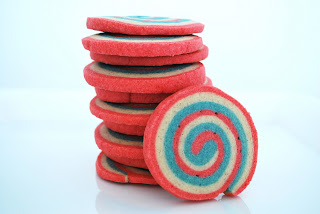 I have always had trouble making log cookies actually round.  Whenever I slice them one side goes flat.  The recipe I used offered two helpful hints in order to avoid this pitfall and it actually worked! 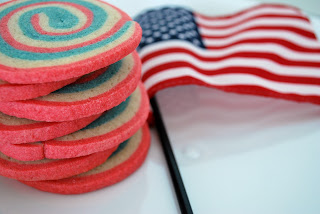 My experiment was successful and my boyfriend enjoyed his "American" Pinwheel Cookies while celebrating his new citizenship!


In a large bowl, sift together flour, baking powder, cinnamon, and salt.
Beat butter until fluffy, about 3 minutes. Add sugar and beat until light and fluffy, about 2 minutes more. Add eggs, one at a time, beating after each addition, then beat in vanilla. Add flour and beat on low just until combined.
Divide dough in three.  Take 1/3 of the dough and form into a square and wrap in plastic wrap, set aside.  Take another third of the dough and beat while squeezing several drops of red food coloring into the bowl.  Continue beating and adding the food coloring until you are satisfied with the color and it is evenly distributed.  Wrap in plastic wrap and set aside.  Do the same with blue food coloring and the final third of the dough.  Refrigerate the three squares of dough for 30-45 minutes.
Cut each dough square into 2 pieces. Roll out one strip of each dough color into rectangles and place the doughs one on top of the other. (The recipe I used said to roll out the dough in between parchment paper.  I had a bit of trouble doing this, so I rolled right on the dough and was careful of sticking.) Trim the excess dough that hangs over the side.  Place a piece of parchment paper on top of the stack of dough and roll the rolling pin lightly over the doughs to adhere, then peel off top sheet of parchment.  Tightly roll up the dough into a log. Wrap in plastic wrap and refrigerate for 1.  Repeat with remaining strips of dough to form another log.
After an hour remove the logs from the refrigerator and roll each log on the counter several times to prevent the bottom from flattening.  Refrigerate 3 hours more, and then transfer to the freezer to store.  Keep the dough frozen until you are ready to slice and bake.
Preheat oven to 350F and grease two large baking sheets.
Using a sharp knife, slice the dough into 1/4-inch thick slices and place 1 1/2 inches apart on baking sheet.  Bake until the non-colored dough is slightly golden, 9 to 11 minutes. 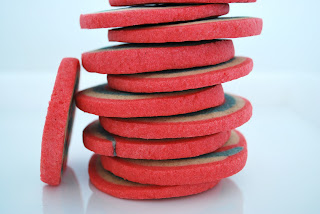 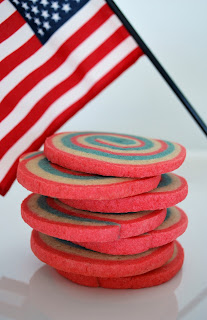