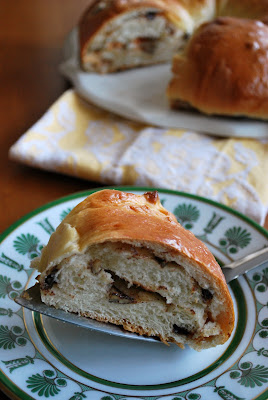 The March 2011 Daring Baker’s Challenge was hosted by Ria of Ria’s Collection and Jamie of Life’s a Feast.  Ria and Jamie challenged The Daring Bakers to bake a Yeasted Meringue Coffee Cake. 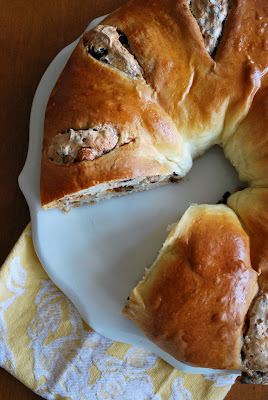 Jamie found the recipe for this cake on a piece of yellowed paper in her father’s collection of clipped out and hand-written recipes from the 1970’s- no source, no date.  But she tried the recipe and it was brilliant! 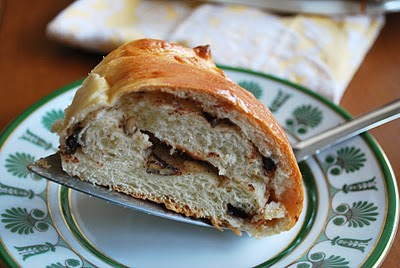 This got me thinking that I need to search for a few old family recipes of my own.  I have a box of my grandmother's handwritten recipes from the 1940's and I bet there are plenty of gems hidden in there. 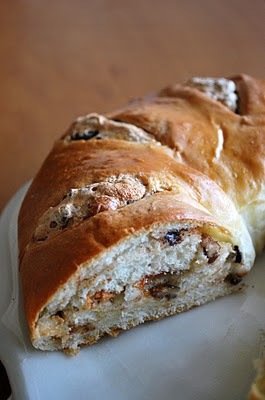 When I think coffee cake, I think of blueberry or cinnamon streusel.  This recipe was nothing of those sorts!  It actually reminded me of challah more then a coffee cake, but it was a pleasant surprise.  The bread was only slightly sweet (like challah), but smooth and light due to the meringue filling which melted into the dough.  And with each bite came a taste of chocolate and butterscotch which just topped it all off.  Delicious!
Yeasted Meringue Coffee Cake
adapted from Jamie's father's recipes from the 1970's
(makes 2 cakes, but can be halved easily)
Ingredients:
For the dough
4 cups flour
¼ cup sugar
¾ tsp salt
1 package (2 ¼ tsp) active dried yeast
¾ cup milk
¼ cup water
½ cup unsalted butter at room temperature
2 large eggs at room temperature
For the meringue
3 large egg whites at room temperature
¼ tsp salt
½ tsp vanilla
½ cup sugar
For the filling
1 cup chopped pecans, walnuts, hazelnuts, and/or almonds (toasted)
2 Tbsp sugar
¼ tsp cinnamon
½ cup semisweet chocolate chips
½ cup butterscotch chips
Egg wash
1 beaten egg
Directions:
Prepare the dough
In a large mixing bowl, combine 1 ½ cups of the flour, the sugar, salt and yeast.
In a saucepan, combine the milk, water and butter and heat over medium heat until warm and the butter is just melted.
With an electric mixer fitted with the paddle attachment, mix the dry ingredients on low speed; gradually add the warm liquid to the dry mixture, beating until well blended.  Increase mixer speed to medium and beat 2 minutes.  Add the eggs and 1 cup flour and beat for 2 more minutes.

Now switch to the bread hook and mix in enough of the remaining flour to make dough that holds together.  Beat for about 5-10 minutes more until the dough is soft, smooth, and elastic.
Place the dough in a lightly greased bowl, turning to coat all sides.  Cover the bowl with plastic wrap and a kitchen towel and let rise until double in bulk, 45 – 60 minutes.
Prepare your filling
In a small bowl, combine the cinnamon and sugar.  In a separate bowl, combine the chocolate and butterscotch chips as well as the toasted nuts.
Prepare the meringue
In a large bowl beat the egg whites with the salt, first on low speed for 30 seconds, then increase to high and continue beating until foamy and opaque.  Add the vanilla then start adding the ½ cup sugar, one Tbsp at a time as you beat, until very stiff, glossy peaks form.
Assemble the cakes
Line 2 baking sheets with parchment paper.
Punch down the dough and divide in half.  On a lightly floured surface, working one piece of the dough at a time (keep the other half of the dough wrapped in plastic), roll out the dough into a 20 x 10-inch rectangle.  Spread half of the meringue evenly over the rectangle up to about 1/2-inch from the edges.  Sprinkle half of your filling over the meringue.
Now, roll up the dough jellyroll style, from the long side.  Pinch the seam closed to seal.  Very carefully transfer the filled log to one of the lined cookie sheets, seam side down.  Bring the ends of the log around and seal the ends together, forming a ring, tucking one end into the other and pinching to seal.
Using kitchen scissors or a sharp knife, make cuts along the outside edge at 1-inch intervals.  Make them as shallow or as deep as desired but don’t be afraid to cut deep into the ring.
Repeat with the remaining dough, meringue and fillings.
Cover the 2 coffee cakes with plastic wrap and allow them to rise again for 45 to 60 minutes.
Preheat the oven to 350°F.
Brush the tops of the coffee cakes with the egg wash.  Bake in the preheated oven for 25 to 30 minutes until risen and golden brown.  The dough should sound hollow when tapped.  Remove from the oven and slide the parchment paper off the cookie sheets onto a table.  Very gently loosen the coffee cakes from the paper with a large spatula and carefully slide the cakes off onto cooling racks.  Allow to cool. 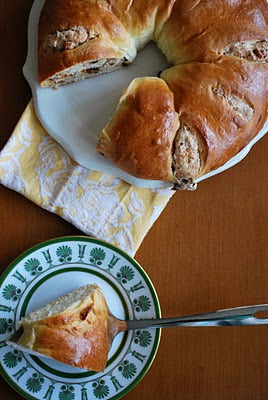 Posted by The Capitol Baker at 6:51 PM