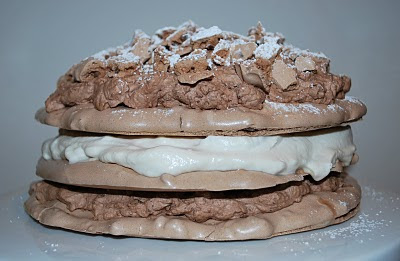 I headed straight to the kitchen as soon as I arrived home from New York this afternoon.  I didn't even unpack...which is very unlike me!  I needed every spare minute I could find in order to have everything ready for my sedar tonight. 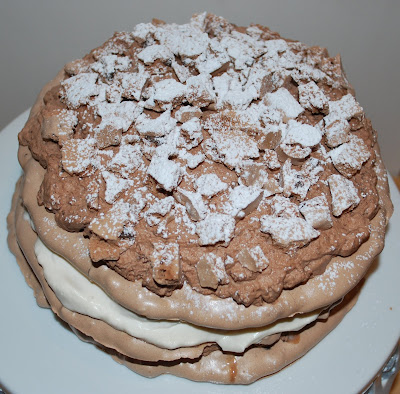 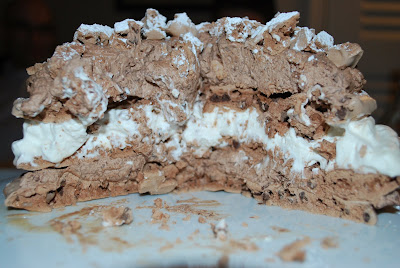 Serving the cake can be a bit messy, but don't worry, it tastes better that way.


Meringue Cake
Preheat the oven to 275 degrees F. Cut 2 pieces of parchment paper to fit 2 baking sheets.  Trace three 8-inch circles on the parchment and leave room for another circle (not marked).  Line the baking sheets with the parchment, marked side down.
Sift the powdered sugar and cocoa powder into a small bowl and set aside.
In a large bowl, beat the egg whites and cream of tartar on low speed until the whites are foamy and the cream of tartar is completely dissolved.  Beat on medium speed until the egg whites look shiny and smooth and the movement of the beaters forms lines in the beaten whites.  The whites should cling to the beaters when you stop the mixer and lift up the beaters.  Slowly beat in the sugar, 2 tablespoons at a time, then beat for about 1 minute.  Sprinkle the powdered sugar over the egg whites and mix on low speed.  Fold in the chocolate chips.
Use a spatula to spread equal amounts of the meringue mixture in each marked circle.  You will use about 3/4 of the mixture for the circles.  Spread the remaining meringue mixture in any shape about 1/2 inch thick on the baking sheet with only one circle.  This meringue will be broken into little pieces after baking to garnish the top of the cake.
Bake for 1 hour until the meringues feel crisp and dry to the touch.  Turn off the oven and leave the meringues in the oven for 1 hour.
Remove the baking sheets from the oven and cool the meringues on baking sheets for about 30 minutes.
Make two types of whipped cream. 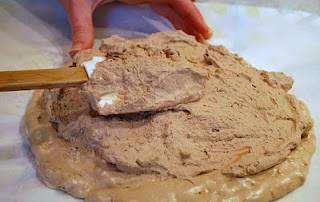 Top with another meringue layer and spread the second type of whipped cream over it. 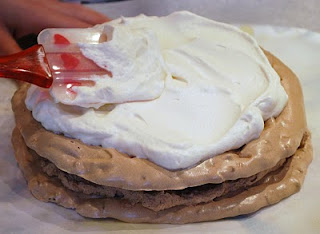 Top the cake with the remaining meringue layer and spread the remaining of the first type of whipped cream over the top of the cake. 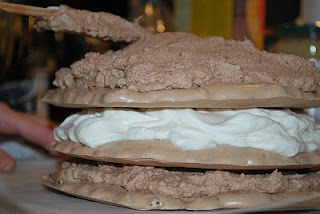 Crush the meringue for the garnish into pieces up to 1/2 inch in size and sprinkle them over the top of the cake. 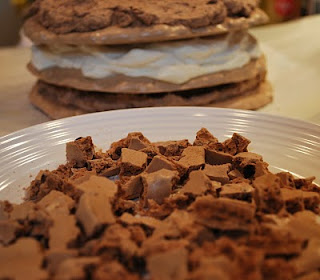 At this point I've found it best to refrigerate the cake for a few hours before serving.  This helps the meringue soften so it's easier to cut into. 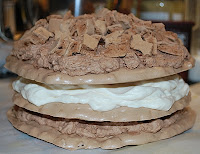 Just before serving, garnish with sliced strawberries if desired, and sift the powdered sugar lightly over the top of the cake.

Use a large sharp knife to cut the cake into slices.  The cake can be covered and refrigerated overnight. 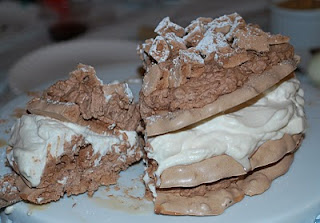 Posted by The Capitol Baker at 1:16 AM